Half breed dogs for crossbreeding? Why?

When having a look to the breeding history of the Kromfohrlaender it becomes obvious that the mating between the fox terrier female Fifi and the Griffon Vendeen male „Peter“ (accommodated by Mrs. Schleifenbaum) was a classic hybrid breeding
For sure, Peter was not purebred, as the puppies did not show any phenotypical characteristics of a Griffon (e.g. the ears or the distinctive occipital sting).

Nevertheless, all puppies were of a very homogeneous outer appearance and the hunting instinct (which could be  expected) was considerably low. Mrs. Schleifenbaum was fully thrilled by the result of this mating and worked forward to get them recognized as a new breed, which was finally successful in 1955.

The Kromfohrlaender race originates from 3 dogs only, which means that inbreeding has been an issue right from the beginning and still is.

The high degree of inbreeding has lead to an extremely high proportion of affected dogs within the Kromfohrlaender race. Also their nature has suffered. Many  of their characteristics are problematic in everyday life.

Such dogs are much appreciated by their families due to their pleasant character and their quality characteristics (e.g. social behavior and size) fit well to a family live.


For sure, the puppies  resulting from such breeding will vary. Some may have bigger ears, may not be properly brown-white, may be smaller or bigger than the anticipated standard. But in any case they shall always come with a friendly character, which is one of the top priorities for the cross-breeding project. Compared to that, the above mentioned deviations are acceptable for the first generation

Keeping the Kromfohrlaender standard in mind, the phenotypical characteristics can be influenced by selective pairing. Important is to enlarge the gene pool and to stabilize and improve the weak character

Is it the pedigree which is most important to a dog-fancier ?
Isn't it rather the character, that convinces?  Flexible, in combination with a manageable size, hardly any hunting instinct and child-friendly.
Many dog owners explicitly decide for a half-bred dog: They might have already made bad experiences with a pure-bred dog in terms of health problems. Or they simply wish to own a unique dog which cannot be related to a certain race at first glance.

Many owners of  pure-bred Kromfohrlaender are quiete familiar with comments like this: „This is a really cute dog. What kind of mix breed is it ? „

It is often said that we know nothing about the origin of the dogs, especially in terms of health, but this is similar with many pedigree dogs. While it has a pedigree, you still do not necessarily have the data proving nature and  health of the relatives.


It is never just any cute dog we take into account for our cross-breeding project. In fact, such dog is expected to fulfill various expectations. Being rough-haired, if possible brown-white, is a must. It must fit in size, have a friendly and pleasant character and be without hunting instinct.
If then also the health checks are positive, we are lucky to have found a dog which  positively contributes to the expansion of the Kromfohrlaender gene pool.
Such a beloved family dog is welcome to contribute to the aims of the VRK cross-  breeding project.

Always having the standard Kromfohrlaender in mind, we will be successful in putting the gene pool of his race back on a wide base, and to breed this lovely and unique race also in future.

Have a look at this kromfohrlaender-typical dogs...
These are all Kromfohrlaender from the VRK crossbreeding project
with half-bred dogs in their pedigree...

and regarding the Kromfohrlaender standard: they are coming up to it! 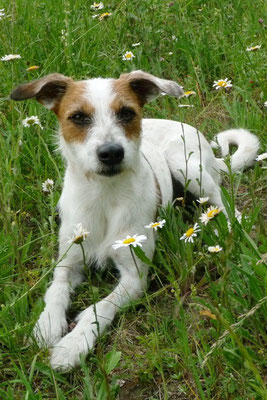 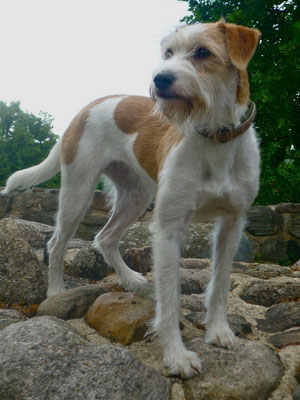 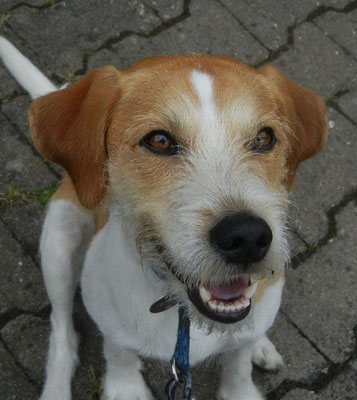 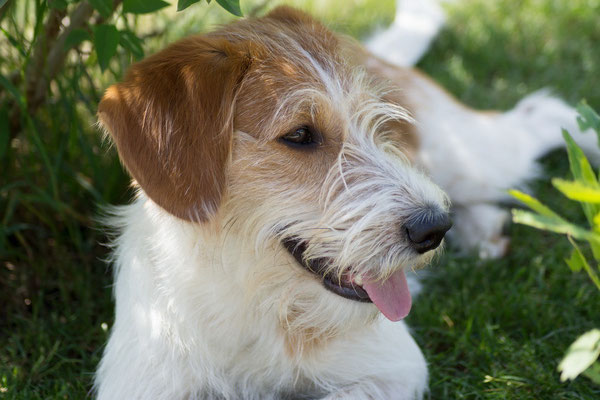 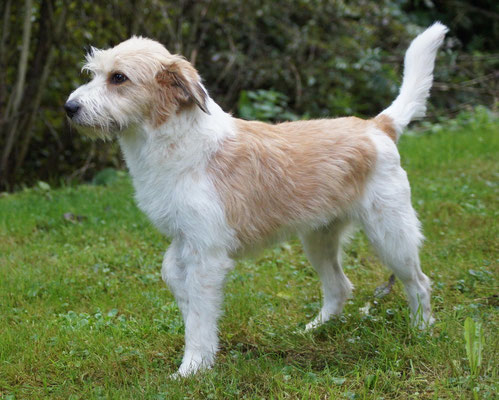 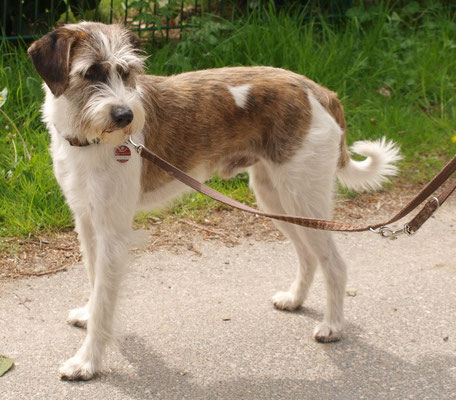 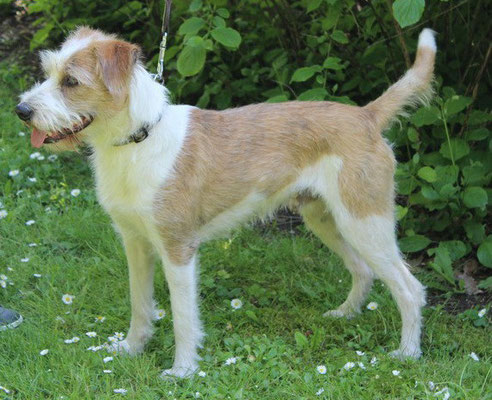 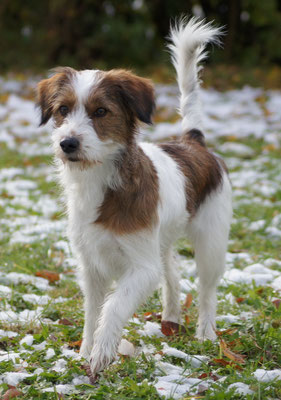 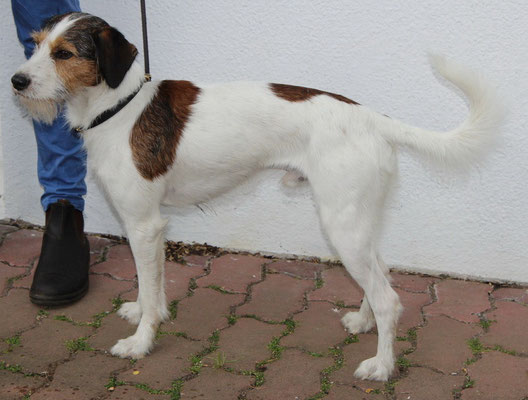 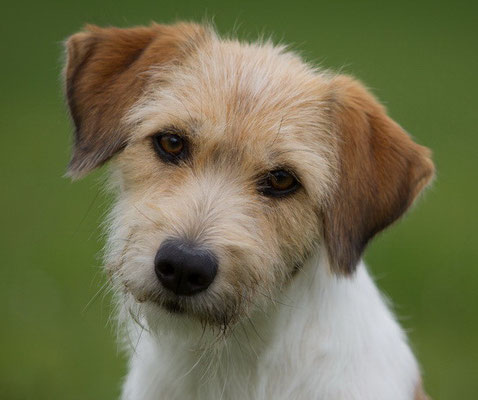 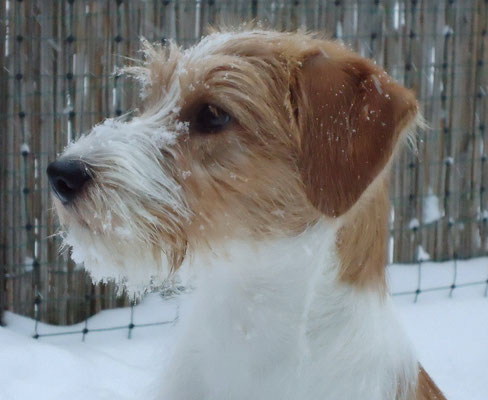 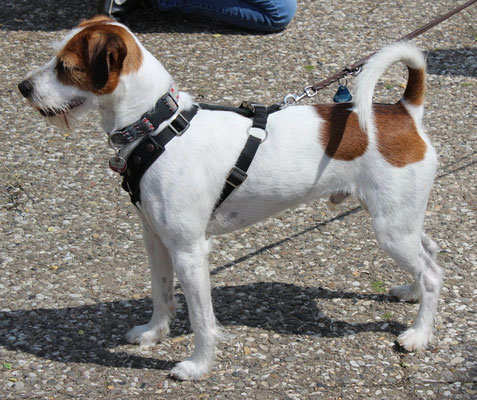 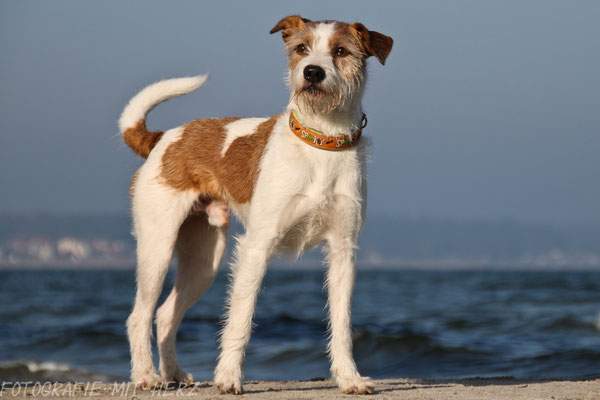